As 2018 draws to a close, here's an interesting story on the importance of digging beneath the surface of your social media metrics.

You may also find the subject matter of the underlying story helpful in your personal life.

Our team tracks metrics performance on a weekly basis, looking at our reach on Facebook and Twitter, as well as aggregate sharing of our content by users on all of our social platforms (including retweets on Twitter) and click-throughs from our posts to the underlying stories.

Here's a typical weekly report of the top posts on Facebook from late last month (click to enlarge): 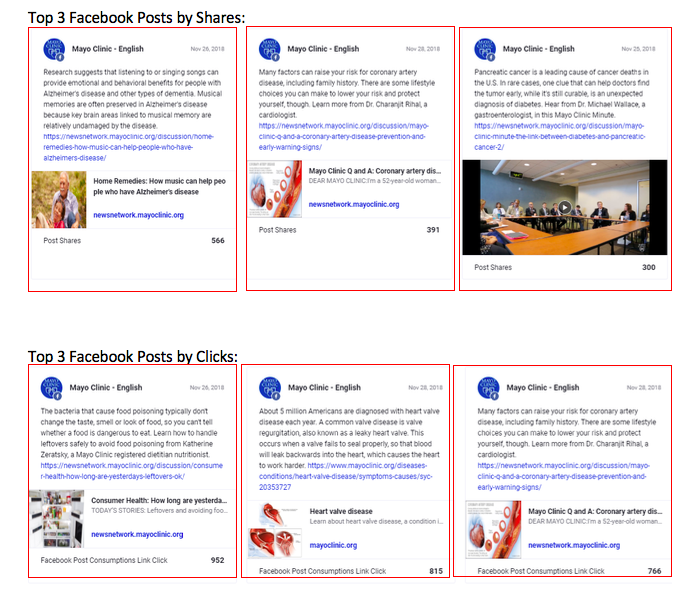 You'll note the red boxes around each post; those boxes indicate that the posts were boosted. Given the declining organic reach on social networking sites, particularly on Facebook, it's common that all three of our top posts have had some advertising support.

That's why it caught our attention on Dec. 17 when we met to review the preceding week's performance.

On December 9, 2018, I had shared a media hit from Food52 that mentioned one of our Mayo Clinic Health System physicians, Chaun Cox, M.D., discussing tips on how to cure or avoid a hangover. I thought with the holidays and New Year’s approaching, maybe this would be of interest to some of our followers.

That was definitely the case! It was our most-clicked Facebook post even though we had not boosted it, with 2.6K clicks, significantly more than the advertised posts that came in second and third. 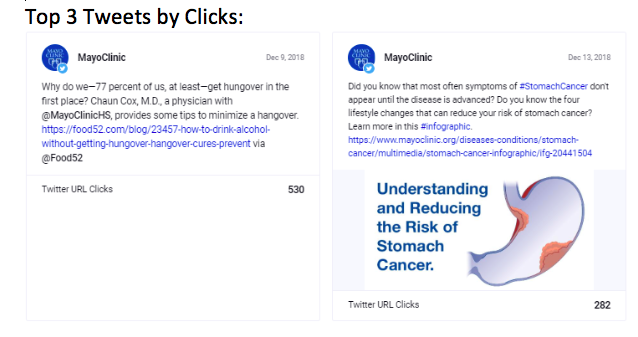 So what's the takeaway? The posts our users find most personally helpful and interesting may not be the ones they decide to pass along to others via shares or retweets. They may not want their friends to know they're interested in the topic so they're less likely to share. A post we did on removing earwax got similar results: lots of clicks, with relatively few shares.

As you and your friends ring in the New Year next week, the Facebook post and tweet may or may not be personally relevant to you. Either way, we hope this case study will encourage you to dig into your metrics to explore what types of posts are clicked vs. shared.

Stacy Theobald is a Public Affairs Coordinator at Mayo Clinic and a member of Mayo's Social & Digital Innovation Team.

Choose a message to share
Social Media: Are you paying attention to what gets clicked and what gets liked?
Social media metrics always have a story to tell. Problem is, can you decipher it?
Your audience won't always share the content that's most important to them. Here's why:
Show More Messages
As 2018 draws to a close, here's an interesting story on the importance of digging beneath the surface of your social media metrics.
This case study might just encourage you to dig into your metrics to explore what types of posts are clicked versus what kinds are shared.