I hear this question at least once a month. Some may laugh, but the hashtag really isn’t that old. It was just born on Twitter 11 years ago, and then it took a few years to catch on.

Technically, a hashtag is a type of metadata tag used on social networks, allowing users to apply dynamic, user-generated tagging, which makes it possible for others to easily find messages with a specific theme or content. It allows easy, informal taxonomy.

In other words, hashtags allow you to categorize your posts, adding them to a larger conversation on the topic.

There are over 1.5 billion tweets using healthcare-related hashtags. Symplur’s Healthcare Hashtag Project is a free open platform for patients, caregivers, doctors, and other providers that connects them to relevant conversations and communities. You can find trending tweet chats, conferences, diseases, and find the top hashtags for each topic. The image below shows the top hashtags used for colorectal cancer. 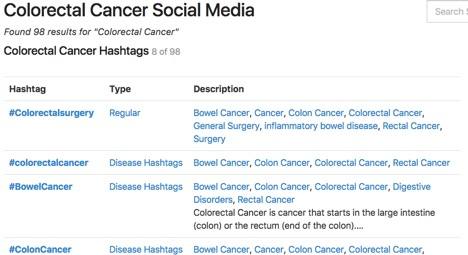 When you post a tweet with a hashtag, you’ll notice the hashtag’s text automatically turns blue, denoting a link. You’ll also see many hashtags in your Twitter feed. You can click on a hashtag to view every public tweet using that tag. The default view is “Top,” which shows the tweets with the highest engagement (replies, retweets, and likes) first. When you click on “Latest,” the tweets are displayed in reverse chronological order, so you see the most recent tweet using that hashtag first. Earlier this week, two physicians here in Jacksonville, Drs. Ben Brown and Rabih Tawk, participated in a #BrainforLife Twitter chat, hosted by the American Stroke Association. The images below show the Top and Latest views for the hashtag #BrainforLife. 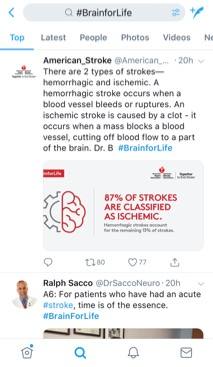 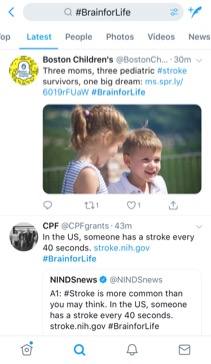 Anyone can jump into a conversation by using a hashtag, which sometimes leads to spammers using popular hashtags to get their content in front of more people.

That’s where Twitter Lists come in handy. A list is a curated group of Twitter accounts. You can create your own lists or subscribe to lists created by others. Viewing a list timeline will show you a stream of Tweets from only the accounts on that list. Once you identify top trustworthy users of relevant hashtags, you could add them to a list. Or, if you’re a member of a group or organization, you could create a list of members. Lists allow you to filter out irrelevant content.

Private lists are only visible to the user who created them. If for some reason you want to have a list (e.g. “Competitors”) but don’t want to reveal its existence to others, choose the private option when you create it. 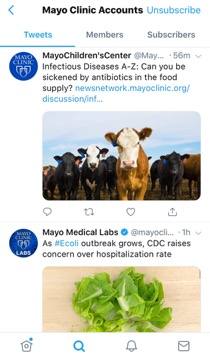 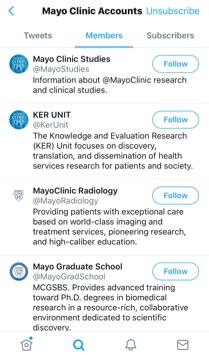