It was fitting and timely that, as Margaret Shepard reported on Wednesday, a viral music video featuring two Mayo Clinic orthopedic surgery residents led to their appearance Tuesday on the nationally syndicated talk show, Ellen.

In many ways the story of Dr. Elvis Francois and Dr. William Robinson mirrors that of another famous Mayo Clinic video that began its rapid ascent to viral status (and a spot on national TV) nine years ago today.

Just as Margaret noticed this video in her Facebook feed on March 13 and shared it on our Mayo Clinic page the next day, on April 7, 2009 I received emails from a few colleagues with a link to a ragtime piano duet video on YouTube.

The video, which featured an elderly couple from Ankeny, Iowa playing "The Old Grey Bonnet" on the grand piano in the Gonda Building atrium on our Rochester campus, was uploaded to YouTube in September 2008 and had been viewed 1,005 times in the ensuing six months.

So I decided to write a post about it on our blog, Sharing Mayo Clinic, which was then only three months old. I posted that link on our Mayo Clinic Facebook page and tweeted it, too.

By the next day, the view count was over 3,800. Here's how it took off over the next month: 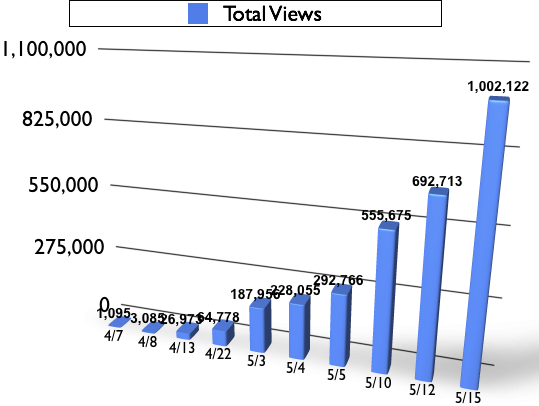 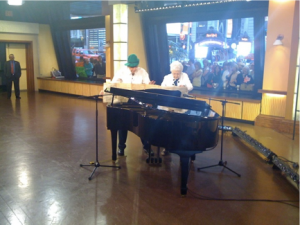 By early morning May 26, 2009 the view count had climbed above the 2 million mark. And that was the day they performed live in New York in the studios of Good Morning America!

I first met Mr. and Mrs. Cowan just before that national TV debut, when I interviewed them in their home, and then it worked out that I was able to be with them in New York, too, along with their daughter, DeDe Shour.

I was blessed to know them for several years with many more interactions. When Mr. Cowan was returning for an appointment in February 2010, DeDe asked if we'd like to schedule a concert. They drew quite a crowd.

In October 2011, when we hosted one of our first social media conferences in Rochester, we presented them a Lifetime Achievement Award in Social Media, and they also performed an extended concert that evening, which they said was going to be their last. My wife Lisa and I were honored when DeDe invited us to a family gathering (if I'm not mistaken, it was their 65th anniversary celebration), and our extended Mayo Clinic social media family was saddened when Marlow passed away at age 97 in May of 2016, followed by Frances on January 4, 2018.

I'll always be grateful for having known the Cowans, and also for the role their story played in our social media journey at Mayo Clinic. They also got a kick out of the fact that in their 80s they became internet sensations, and they loved to see the view count of their video continue to grow.

As of the 9th anniversary of that fateful post, that total is more than 11.8 million views.

When a light, fun video goes super-viral, it certainly has brand, and possibly indirect recruiting value.

Do you ever consider editing the video or description early on in it's viral trajectory to give it direct medical value? ( for example in the elderly couple video a link about getting a pneumovax at 65 to prevent pneumonia , colonscopy screen at 50, etc ) ;