Your Mileage May Vary: Podcasting at Mayo Clinic

Last week I described how we adopted the "Proceed Until Apprehended" model of innovation in launching our first Mayo Clinic podcast. Using :60 audio files that were already approved for distribution to radio stations and that were archived on a MayoClinic.org page as our content source, a colleague, Mindi Klein, developed an RSS feed that pointed to the audio file segments, and then listed that feed in the then-new iTunes Podcast Directory.

After we created the podcast I kind of forgot about it, although Mindi continued to load a new segment into the feed each day.

But about six weeks later someone in the content commercialization team in what was then called Mayo Medical Ventures (MMV) got in touch with my colleague Shelly Plutowski, who managed the editorial content for our syndicated TV, radio and print offerings. Shelly was a member of the media relations team, of which I was the manager.

As I remember it, she said something like this:

"I just got a call from MMV, and they said a company called to ask about advertising on our podcast. Do we have a podcast?"

This pointed out a deficiency in either my management or communications skills, as I had failed to discuss our podcasting experiment with the person responsible for the production of the audio segments. Not one of my finest moments. 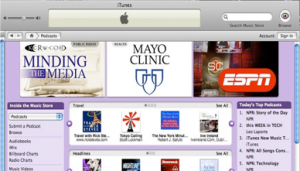 On the positive side, however, the reason that company was interested in advertising on our podcast was because it was currently being featured on the front page of iTunes.

Our podcast held that top middle position on the iTunes front page for about three weeks. The result: downloads of our audio segments from MayoClinic.org increased from about 900 in the month before the podcast feed started to more than 74,000 in the first month after it was featured on iTunes.

This wasn't an ideal podcast. The radio segments had been intended for mass audiences and were short enough to fit the radio format. Subscribing to have every one of these :60 segments delivered automatically to one's computer, however, may have suggested an inordinate interest in various illnesses. In fact, I sometimes called it "The Hypochondriac Feed."

But we gained a lot through this "Proceed Until Apprehended" experiment. Here are a few observations and lessons learned that you may find helpful:

Our next step was to begin that exploration. I'll tell that story in next week's post.