When a sudden unexpected disaster involving loss of life occurs – whether it’s a tornado in a populated area, a deadly traffic accident involving dozens of vehicles, or a mass shooting in a crowded nightclub – two completely incongruent conditions almost always emerge: chaos and a public demand for real-time information.

For medical responders, this kind of disaster prompts an all-hands-on-deck approach, which tends to pull them out of their routines, resulting in a potentially chaotic environment. At the same time, the tragedy creates a public demand for immediate information, which is best delivered through social media.

So what is a social media professional, who typically plans and schedules social media content according to established branding strategies, supposed to do when the pressure is on to deliver accurate content as quickly as possible?

This was the challenge that Amanda Jane Saunders-Johnston and I faced in the aftermath of the Pulse Nightclub shooting on June 16, 2016. CCH Marketing is the digital marketing agency for Orlando Health.

Because Orlando Regional Medical Center (ORMC), the flagship hospital of the Orlando Health system, is located just two blocks from Pulse and is Central Florida’s only level-one trauma center, 44 patients were transported there for treatment within a couple of hours. Amanda Jane and I quickly put a process into action that:

The results? As one Twitter user commented in the afternoon after the shooting, “Bravo to @orlandohealth … tweeting facts only and keeping people informed. Makes the news coverage obsolete.” 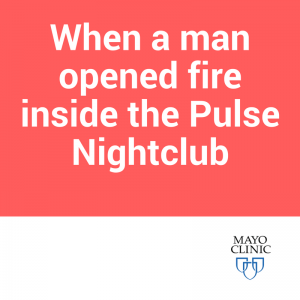 During our presentation at the Mayo Clinic Social Media Network Annual Conference December 11 - 12 in Scottsdale, Ariz., Amanda Jane and I will speak in detail about how social media contributed to ORMC’s communications, how they formulated the hospital’s social media strategy, their role in serving the victims and their families, and the challenges they faced in managing the flow of reliable information.

We hope you will join us!

CCH Marketing earned a 2017 Silver Anvil Award for Crisis Communications from the Public Relations Society of America in recognition of its work after the Pulse tragedy. Founded in 2007, CCH Marketing is a full-service digital marketing agency located in Winter Park, Florida.